(a) Suppose that G is a connected simple planar graph containing V vertices, E edges and
F faces. Suppose further that each of V; E and F are prime numbers.
Prove that exactly one of V; E or F must be equal to 2.

(b) Suppose that G = (V; E) is a graph on n vertices, where each vertex has degree at least
n=2. Prove that G must be connected.

(c) Let G be the set of all planar simple graphs. Given a planar graph G, let #V (G) denote
the number of vertices in G, and similarly let #E(G); #F(G) denote the number of edges
and faces in G. Define the function f : G —— Z as follows:

What is the range of f: i.e. what integers are possible outputs of f?

(a) Suppose that we are working over the alphabet Σ = fa; bg. Draw an automata that
recognizes the language of all strings that contain exactly two a’s and two b’s (in any
order.)

(b) Let p be a prime, and let L be the set of all strings over the alphabet fag whose lengths
are multiples of p. Prove or disprove the following claim: \If M is a DFA over the
alphabet fag whose language of accepted strings is L, then the number of states in M is
a multiple of p.”

(a) Find a ternary length 4 code C with distance 3, containing at least 4 elements.

i. Describe how to make a n × n Latin square, for every n.

ii. Given a Latin square, you can make a table of its cells by listing the row, column,
and symbol for each: 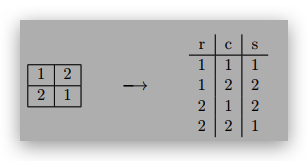